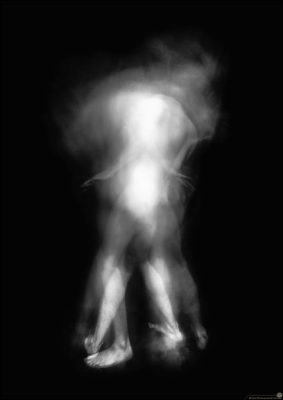 Photography is generally thought of as a medium that simply copies a moment in time, capturing what the eyes see, however the abilities of the camera greatly surpass this. A long exposure, for example, can record a length of time but compress it down into one single image. This visual compression of time becomes a fascinating form of surrealism.

My goal was to capture the energy and movement of dance, but within one exposure. I put on music and began dancing while taking long exposures of myself (movements were highly inspired by the 2011 music video “Lotus Flower” by Radiohead). One speedlight is randomly flashing a few times on low in order to “freeze” parts of my pose within the blur… Moments of “before” and “after” are happening within a single image that transcends our view of time, the body, and perception.