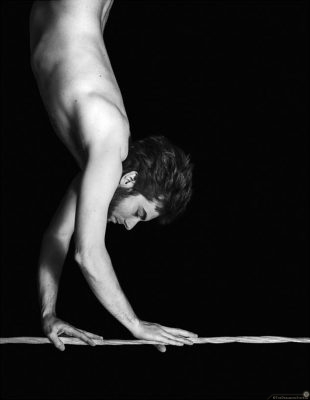 I began this idea many weeks (or months) ago, but was not happy with the poses I had in mind. I decided to re-shoot it. Basically I wanted a man walking on a wire, but with such ease that there is almost no stress involved with the difficult task. I tied rope between two light stands, laid a soft mat on the floor, and then posed myself upside down – then I could simply flip the image 180 degrees and create a simple illusion. I tried a bunch with my feet but for some reason I decided to do a few poses with my hands. This was exactly the shot I was looking for… It makes me think about how sometimes, although it might be rare, we are encountered with a difficult situation or task and dive into it without worry or fear. It becomes effortless.