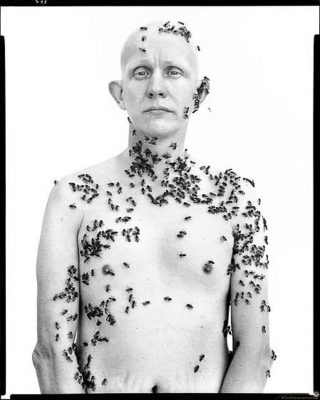 Avedon was an American fashion and portrait photographer with a huge collection of work. Many images we may have seen but didn’t know he took them. The famous Simon and Garfunkel album cover, a young Bob Dylan, Marilyn Monroe, Andy Warhol, The Beatles, Janis Joplin, Buster Keaton and many more… The New York Times spoke of him saying “his fashion and portrait photographs helped define America’s image of style, beauty and culture for the last half-century”… Here we see a beekeeper with his bees, simple and surreal. I recall hearing that Avedon would set up a white backdrop so that many photos could be taken outside using the sun. He also has left in the strange border markings that tell the viewer a large format film camera was used. See more at http://www.richardavedon.com/.